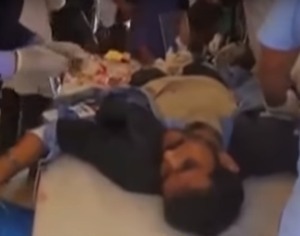 Four people were killed and 10 injured on Sunday, in an attack on a hospital in Northern Yemen. Medicins Sans Frontieres or MSF, an international medical group, reported the attack being the third of its kind on its medical centres throughout the nine months of war.

MSF maintains that it was a projectile that hit the Shiara Hospital in Yemen’s Northern province, Saada, saying it is still not clear who was behind the attack. However, this being the third major attack within the nine months of war; it is believed that Saudi aggression is behind it, having had responsibility for the two previous attacks.

An unidentified resident said “The Saudi aggression continues to target hospitals; the most recent was Razeh Hospital today with a direct missile hit inside the hospital, injuring many patients and staff.”

MSF said Saudi-led air strikes hit another of its health facilities, Haydan Hospital on October 27 and a Taiz Health Centre on December 3.

In a separate incident, the state news agency reported a hospital in central Yemen, in the Swadi district of Bayda province was hit by a Saudi-led coalition air strike on Monday, January 11.

Saada, a stronghold of the Iranian-backed Houthi rebels, has faced a particularly intense bombardment from the Saudi-led coalition supporting the Yemeni government.

As India’s COVID Crisis Rages, Its Neighbors Brace for the Worst