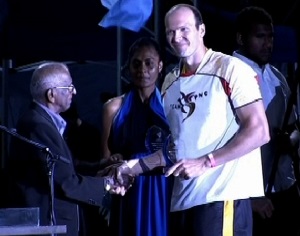 Papua New Guinea’s Super Fish, Ryan Pini, was announced last night as the athlete representative to serve on the executive board of the Pacific Games Council for the next 4 years.

Pini was nominated by athletes at the Games Village over the past 2 weeks.

It did not stop there, as the six new games record holder, he also scooped the best male athlete in the Inaugral Pacific Games Sport Award.

And in other awards, New Caledonia’s Lara Grangeon got the Female’s Oustanding Athlete, while Thibault Mary, and Emma Terebo grabbed the junior male and female awards.

At the French Open, Naomi Osaka Seeks Comfort on Clay and No Interviews