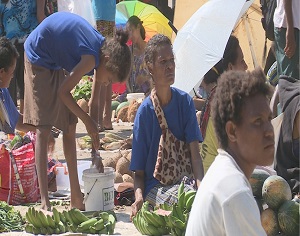 Women of Rigo District are calling on the Central and NCD provincial governments to resolve issues pertaining to the Central Market Project in Boroko, Port Moresby, and have the market completed and opened for use.

These calls were made in light of concerns over the lack of market facilities available for Central farmers.

They say that despite their province being closest to the nation’s capital, they continue to face hardships when bringing their produce to markets in the city to sell.

The women highlighted the need for market facilities to be made available for them; adding that Central farmers are often intimidated and harassed by persons of other ethnicities, at existing markets in Port Moresby.

This, they say, makes them feel unsafe. They also highlighted the ethnic clashes at city markets by persons from other provinces, as a hindrance to them.

The women concerned made these calls at the recently held Rigo Women in Business Expo in Kwikila.

Farmers in the area are of the view that the Central Market Project will allow for them to market their goods in a safe and secure environment. These sentiments were also shared by those in the arts and crafts sector.

The Central Market Project was first opened by former Governor of Central, Alphone Moroi, and the NCD Governor in October of 2011.

The project has since been abandoned, prompting the women to voice their concerns.