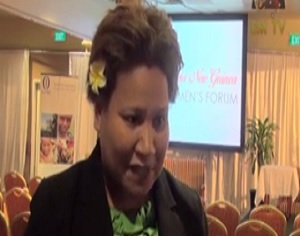 In an interview with EM TV at the 2015 Women’s Forum, Ms Solomon said the government is playing its part by putting in place policies that give prominence to gender issues.

Part of the implementation of these policies is for women at home to exercise gender equality with their children.

Ms Solomon said Papua New Guinean women are a strong and resilient group. She said despite the remoteness of many family units from basic government services, local women still manage to provide and care for their families.

During the forum, panel discussions touched on PNG’s international commitments to strengthen women’s rights. Much of the discussion focused on implementation strategies PNG is using.

With the United Nation’s Millennium Development Goals (MDGs) due this year, Council of Women President Theresa Jaintong, said more needed to be done on the ground, where majority of women live in communities.

Issues of access to education for girls and the damaging results of violence against women are still in need of much attention.

Prime Minister Peter O’Neill was not at the forum today, as he is attending an Australia-PNG business council event.

However, in a statement, he said a man of strength is one who never resorts to violence against women. He said everyone must respect the rights and safety of women in the community.