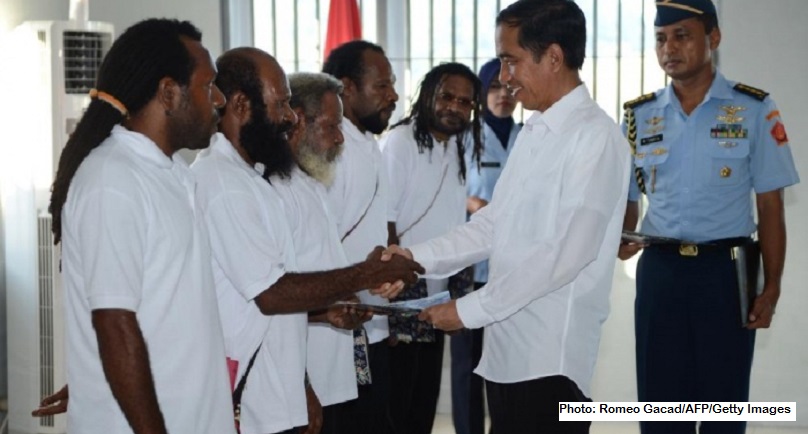 The Indonesia president has also lifted the media blackout in Indonesia’s disputed province of Papua.

Widodo greeted the prisoners in a ceremony at Abepura prison in Jayapura and declared a fresh stance on the province of Papua, which is one of Indonesia’s least developed provinces.

“Today, we are releasing these five detainees to stop the stigma of conflict in Papua,” Widodo said, addressing media.

Upon his appointment to presidency last October, Widodo promised to improve abysmal human rights records in Papua. The province has been allegedly wrought with killings, torturing, arrests and other human rights abuses since it was handed over, in a UN-supervised referendum in 1969, to Indonesia. The referendum, called the Act of Free Choice (1969) is, to this day, strongly disputed by people of the Papua region.

Human rights organisations have disputed hard line approaches previously taken by the Indonesian government, where dozens have been jailed for simply raising the West Papua flag of independence.

Last August, two French journalists were detained in the province of West Papua for filming a documentary.

Despite being arrested for incorrect travel documentation, the stigma of separatist conflict within the Papua region and Indonesian government is strong. Upon the journalists’ arrests last year, West Papua advocates wrote:

“The Indonesian government is still systematically trying to cover up their atrocities in West Papua by banning all foreign media. They do not want the world to know the truth because they know that when it is exposed, the international community will help to support the West Papuan people and their struggle for self-determination…

“Please do remember the West Papuan people, as well as Thomas and Valentine in your thoughts and prayers tomorrow as West Papuans will risk their lives to help bring freedom to journalists who are giving the Papuan people a voice.”

The Indonesian government’s lifting of the restriction on foreign journalists, as well as the release of five political prisoners marks a significant turning point for the plight of the region of Papua.