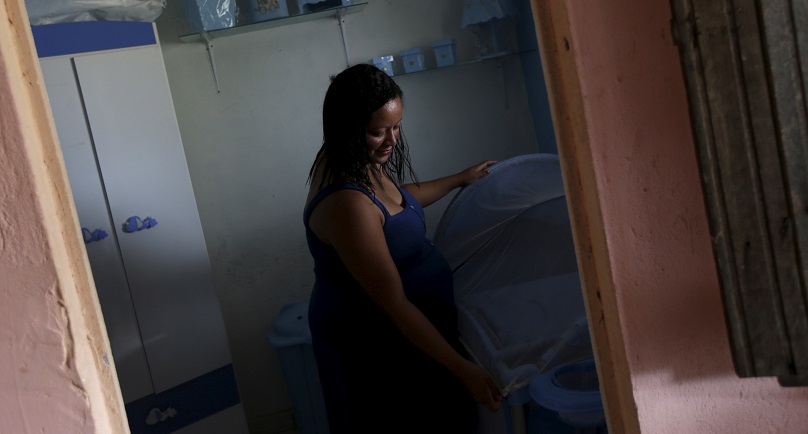 Image: Adilma de Oliveira, 29, who is eight months pregnant, stands in the bedroom prepared for her baby, at her house in Congo, Brazil, February 16, 2016. REUTERS/Ricardo Moraes

By Stephanie Nebehay and Tom Miles

GENEVA (Reuters) – The World Health Organization (WHO) advised pregnant women on Tuesday not to travel to areas with ongoing outbreaks of Zika virus due to the potential risk of birth defects.

Sexual transmission is “relatively common” and health services in Zika-affected areas should be ready for potential increases in cases of neurological syndromes such as microcephaly and congenital malformations, it’said.

“Pregnant women whose sexual partners live in or travel to areas with Zika virus outbreaks should ensure safe sexual practices or abstain from sex for the duration of their pregnancy,” the WHO said in a statement, based on advice from its Emergency Committee of independent experts.

Previously the U.N. agency had advised pregnant women to consider deferring non-essential travel to areas with ongoing transmission of the mosquito-borne virus, which is spreading through Latin America, including Olympics host Brazil.

The link between Zika and microcephaly, where babies are born with small heads and developmental problems, as well as Guillain-Barre syndrome, which can cause paralysis, has not been proven but studies point in that direction, it’said.

“Microcephaly is now only one of several documented birth abnormalities associated with Zika during pregnancy,” WHO director-general Margaret Chan told a news conference. “Grave outcomes include foetal death, placental insufficiency, foetal growth retardation and injury to the central nervous system.”

“It is important we recommend strong public health measures and not wait until we have definitive proof,” she said.

“What we see in Brazil now is what could occur in Colombia and other countries in the next few months and it’s very alarming,” said David Heymann, who chairs the WHO Emergency Committee set up on Feb. 1.

Heymann said of WHO’s recommendation for pregnant women not to travel to Zika areas: “The onus is on countries to identify and report where they have outbreaks and where they don’t.”

The WHO did not recommend any general trade or travel restrictions. But it’said airports should be sprayed to eliminate mosquitoes and their breeding grounds and authorities should consider “disinfection of aircraft”.

Bruce Aylward, WHO Executive Director for Outbreaks and Emergencies, told reporters that sexual transmission had only been documented as spreading from men to women.
“There’s no evidence of women-to-men (transmission), so this dead-ends,” he said.