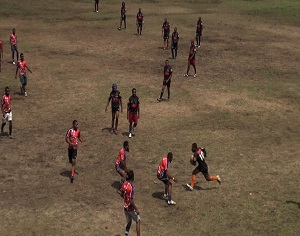 The Gerehu-based Rugby League Club, White Haven Brothers, have reached the top of the Hohola Off-Season Rugby League competition, having lost only one of their seven matches played so far.

Nearest rivals Hox2 Dumpers trail behind, by only a single point, as the tournament reaches mid-season.

In the afternoon A-grade Matches, the Dumpers made an early claim to the top spot, beating suburban rivals Taraka Dragons 14 points to eight to temporarily lead.

However, White Haven were heavy favourit’s, defeating Cardno Mix Mates, who are currently out of the top eight.

A mid-table decider between 17th placed Funeral Homes Laumas and CB Pythons, saw the Lauma’s beat the pythons in a gritty and narrow 8 points to four showdown, with neither side giving in until the end.

If not for petty handling errors and dubious try-line mistakes, the score could have been greater for the Lauma’s.

Acting President of the Hohola Off-season League, Lui Sine, said that while the majority of participating clubs are from the Hohola suburb itself, it is the Gerehu and neighbouring Tokarara sides that have taken this season by storm, dominating the top four positions in both the A and B Grades.