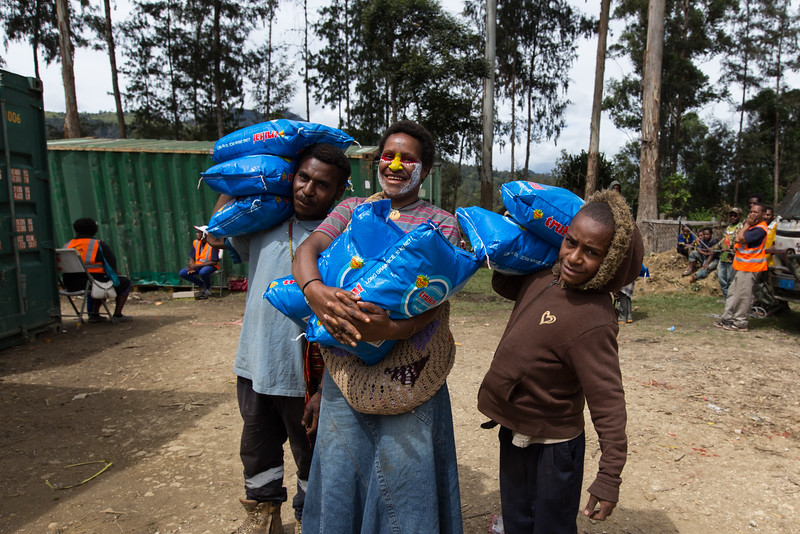 Papua New Guinea is one of the countries affected by the recent El Nino-related drought and frost. Several provinces within the country have received relief supplies from provincial governments and non-government organisations.

Last week in the Pilikambi Rural LLG in Enga province, food continued being distributed to affected communities. Food distribution in the area began on June 6, and according to the WFP Situation Report, will end mid this month.

Delegates from the United Nations World Food Programme (WFP), the National Government and UN partners visited the LLG to monitor the distribution of food. They were welcomed by several hundred Engan tribesmen, local leaders and local government officials.

“We know that the food security situation may evolve over the upcoming months in areas such as the Highlands, where crops may be ready for harvest by late August or early September. We will continue to assess where the hungriest people in the Highlands and Lowlands Regions live and the best ways to reach them,” said Persson.

WFP has reached over 45,000 people to date, providing rice, fortified with essential vitamins and minerals, and technical assistance to supplement the PNG National Disaster Centre (NDC).

Although the El Nino effect is declining, 180,000 people still suffer from agricultural loss and are in need of food assistance.

WFP plans to reach a total of 180,000 people in the country, however requires an additional USD$3.4 million until 31 August to complete Emergency Operation 200966: Food Assistance to El-Niño-affected populations in Papua New Guinea.