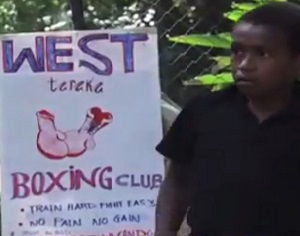 Professional boxer Douglas Walo is aiming to introduce boxing to the youth in one of Lae’s notorious settlemen’s, West Taraka.

The 28-year-old aims to help West Taraka youths keep away from illegal activities and instead lure them into a boxing career.

From a mixed parentage of Morobe and Gulf, the young boxer grew up in the West Taraka neighbourhood. West Taraka is located on the fringes of the city and is known for its high crime rate.

Walo wants to become a role model in his community through boxing. He started his boxing career in 2007 when he took part in the third PNG Games, where he won his first gold medal.

In 2008, he was selected in the PNGsquad and soon after he underwent a five-year training program before he started fighting as a professional. He has won two professional belts during his sporting career.

Walo returned to his community after a loss to his Filipino opponent in Port Moresby in 2012 and started the West Taraka Boxing Club early this month to help the younger generation keep away from illegal activities, as well as develop their interest in boxing.

More than 40 youths have joined the club. The participants were delighted to learn boxing, not only as a sporting career but for self-defence, especially for young girls.

West Taraka Boxing Club is like many other sporting clubs that need financial backing.

Walo started off training these youths at the back of his house with nothing more than two pads.

He needs a proper gym and boxing ring to train these upcoming fighters.

He is calling on business houses and the Morobe Provincial Government to help him make a positive change in West Taraka.

PCNC Player of the match earns trip to Australia