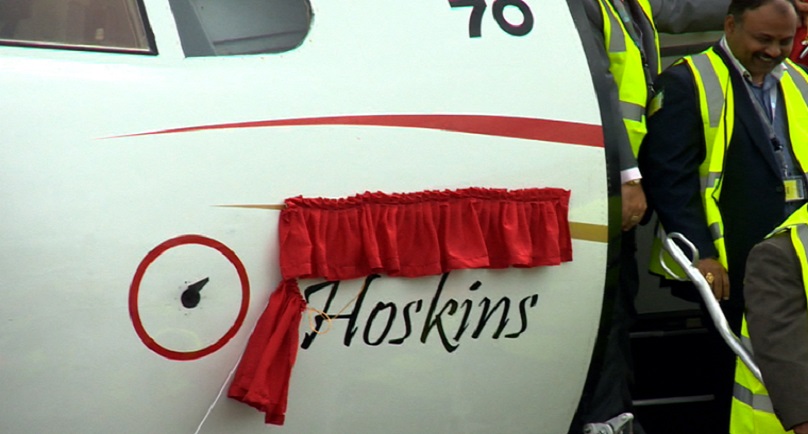 With the recent upgrade of its airport and terminal facilities, this will boost economic activities and increase the potential of travel.

The Governor’spoke at yesterday’s commissioning of Air Niugini’s third Fokker 70, named as Hoskins, and for the national flag carrier being named as the official carrier of the PNG Games.

“For the name Hoskins to be christened on one of Air Niugini’s Fokker 70 aircraft is a joyous moment for the people of West New Britain Province, and we accept it with humbleness.

“Naming of Hoskins on this aircraft, creates a special bond between our people of West New Britain and the National Flag Carrier,” he said.

Governor Muthuvel says the upgrade of flight services into the province has boosted economic activities.

Air Niugini Board Chairman, Sir Fredrick Reiher, said that West New Britain was recognised for its domestic services in the key regional market, and the commitment Air Niugini has to maintain affordable and safe airline services.

“This aircraft is the third of the nine Fokker 70 aircraft that will join the Air Niugini fleet over the next 18 months.

Pubic Enterprise and State Investment Minister, William Duma, said Air Niugini has grown from strength to strength and thanked its board for continuing to improve service.

““You have not let Air Niugini down or our country down. Papua New Guinea is one of the most difficult countries to run particularly in the aviation industry, as we all know.

“And yet, despite the numerous sometimes unrealistic surcharges that we impose as government, they have been able to deliver some dividends to us,” Minister Duma said.

Muthuvel, Duma and Sport Minister, Justin Tkatchenko were all on hand for the unveiling.