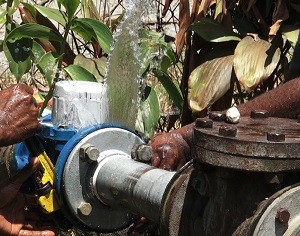 The Police department owes Water PNG close to K3 million, while the Buimo Jail has to pay over K1.5 million.

Water PNG is on a drive to recoup around K45 million in outstanding paymen’s nationwide.

While this move by Water PNG may come as shocking to people, the SOE maintains it had to be done in order to recoup huge losses.

Operational cost to keep the state owned entity-supplying water is becoming more expensive, while the profit margin is low.

People and institutions are not paying their bills and its all-accumulating huge costs.

This disconnection happened at the Lae Bumbu Police barracks, with a current outstanding amount of K2.9 million in bills.

Police families have demanded that the Police Commissioner make directions to pay the bill.

“We have been living without power for the past seven years and now we have no water,” said Police Officers wife, Regina Camilus.

Another government run correctional institution, the Buimo Jail, will not have water flowing out from the taps for its 700 inmates and nearly 2,000 people living at the premises.

“Buimo has many problems, this is accumulating, I have to take this up with the Correctional Service Commissioner,” said Bumio Jail Commander, Felix Namane.

The move now puts pressure on all authorities in the Lae district, Morobe Province, and the national government to pay for the bills.