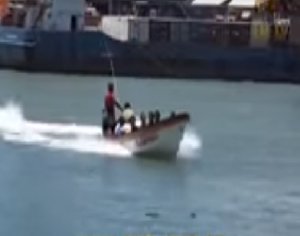 Police in Morobe are looking at deploying more officers along coastal waters to deal with the issue of sea piracy, and other marine related matters.

Provincial Police Commander, Augustine Wampe, says they have received many reports about sea piracy, and are now looking at ways to effectively deal with it.

Sea piracy is a big problem around the coastal waters of Morobe, as well as other parts of the country.

The lack of capacity and resources is making police work difficult when it comes to cracking down on sea piracy.

Levels of crime have been on the increase in the province, and throughout the Momase region. This increase is putting pressure on police to establish a water police unit.

The unit will be responsible for marine policing, and will also take charge of other sea piracy matters.

Commander Wampe, Assistant Commissioner of Police for Northern Region, Peter Guinness, and Huon Gulf MP, Ross Seymour, have met with locals from the Morobe patrol post area to find ways they can deal with sea piracy.

Seymour has assisted the Morobe command by providing a boat to monitor the coastal waters along the patrol post area.

Peter Guinness said water policing is one of the issues he wants to capture in his command. He will be liaising with police headquarters to assist Morobe command with a water policing unit, as well as finding the funding required to back the command.