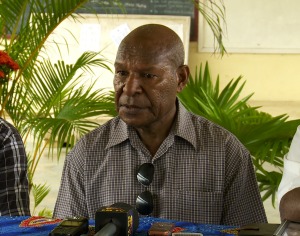 These documen’s will be issued to CS Minister, Jim Simitab, and the other three defendants.

Judge Colin Makail issued the directions this morning, after Irene Gugugia, the state solicitor asked the courts for time to prepare necessary documen’s.

This follows a judicial review which was granted in February by Judge Makail.

Because a judicial review evaluated the process, in which Waipo was revoked as CS Commissioner, lawyers will now be preparing for the trial.

The time given by the National Court will allow lawyers of both parties to prepare documen’s that will later be submitted in court before a trial date is set for judicial review.

While the matter was being heard in court, a confrontation was started by supporters of Waipo and Nepo outside the CS Headquarters in Port Moresby this morning.

A similar confrontation occurred in February when Chief Inspector Nepo was appointed by the National Executive Council to act as Commissioner.

On Friday, Michael Waipo was reinstated as CS Commissioner by the Supreme Court.

The ruling was made by Judge Terence Higgins on the grounds that the process which was taken to terminate Waipo as Commissioner was not correctly followed.

On the other hand, Nepo denied receiving a copy of the court order and stated that he is the acting commissioner.

Next Monday, when the matter returns to court, Waipo’s lawyers will make submissions to endorse directions that Waipo hasprepared.