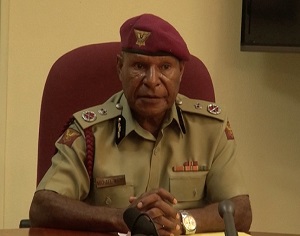 The Correctional Service Commissioner, Michael Waipo, is adamant that he has not been removed from his position.

Commissioner Wapio made this remarks following unrest between members of the Correctional Service, on the appointment of an acting commissioner, last Friday.

He says he is not aware of the allegations laid against him and has not receive any formal documents asking him to leave.

“There were no formal documents served to me advising me of my removal. I am still the incumbent commissioner and I have been appointed by the National Executive Council in September 2014, Waipo said.

The news of the appointment came as a surprise for him on the morning of February 6.

Waipo says the unrest is the first of its kind for CS and he’s concerned that if the matter is not properly handled Papua New Guinea’s national security will be at risk and it may signal jail breakouts.

Acting as the incumbent commissioner, Waipo issued instructions for all correctional officers to return to work or they will be suspended and put off pay roll.

“I am issuing instructions to all correctional officers to return to work or they will be put of suspension without pay,” Waipo said.

Last Friday, the correctional service headquarters here in Port Moresby was closed following reports of a forceful handover ceremony that was going to take place.

However, nothing has eventuated to this date and commissioner Waipo says he is yet to hear from the Correctional Service Minister, Jim Simatab.

Commissioner Wapio joined the Disciplinary Force as a cadent in 1974 and has served as a CS officer for over 40 years.

He was appointed by the National Exertive Council in September, 2014 to take up the highest post in CS and introduced the Rural Lock Up, an initiative to build community correctional centres in selected provinces.