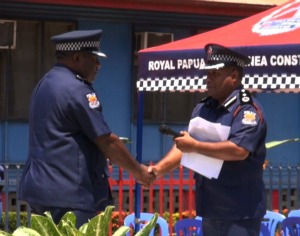 He took over the reigns from newly appointed Acting Police Commissioner, Ivan Lakatani, in a ceremony today.

Lakatani said he is satisfied with how he has led the Lae Metropolitan Command for the last two and a half years.

Wagambie Junior in his first address to the Lae Metropolitan Command said he wants police officers to be polite, respectful and considerate in their manner toward the community.

The former Madang and East New Britain Provincial Police Commander says involving the community in operations is the future of enforcing law in the industrial hub.

“I’d like to see that Police here are more productive and proactive,” said Wagambie.