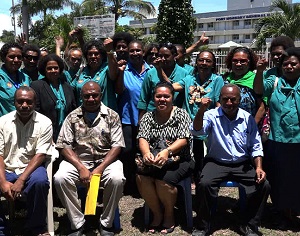 He made these remarks today at the announcement of the newly appointed executives for the Papua New Guinea Health Support Workers Association.

Muddle says that union groups are important in terms of addressing employee’s issues, such as their terms and conditions.

The newly appointed executives of the PNG Health Support Workers Association promised their members that they will strive hard for the Department of Personnel Management to accept their claims, which they lodged last year.

Some of the claims include a housing allowance and their back-dated pay of five years ago.

This non-clinical workers claim that the government for the last 40 years has ignored them.

They said that conducting a strike action would be the last resort after they have exhausted all negotiations with appropriate bodies.

They want the department to sign their agreement by April this year.

Health support workers are non-clinicians who work in the health department of hospitals, such as administration staff.

Currently they have 3,000-plus registered members in 13 provinces.

Lae Women Against Gender Based Violence