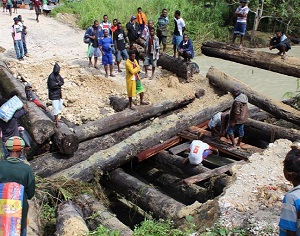 The collapse of the Daunda bridge in Vanimo on Tuesday, is now causing more hardships for travellers. The vital bridge connects the PNG-Indonesian border to Vanimo.

The bridge was built using logs from local logging companies. This is the second time the bridge has collapsed in a time frame of a year.

To date, the Sandaun Provincial Government has yet to respond, and locals are now appealing to the national government for immediate assistance.

The Vanimo Green District is linked by road from as far as Green River to the Sepik River in East Sepik Province.  The district’s MP, Belden Namah, announced last month that the entire district would soon be connected by road at the end of the month.

He also announced his availability for the Sandaun Governor’s position that has been vacant for the last two years. Read story here.

Locals and other concerned citizens have taken to social media to call on relevant authorities to take control of the situation. Members of the West Sepik Forum group on Facebook have questioned the role of the provincial government, and demanded for authorities to act swiftly in repairing the bridge.

In a phone conversation with Acting Sandaun Governor, Paul Negai who is in Port Moresby, he revealed that his administration has yet to present a report to him and provide updates on the status of the bridge.

Locals are struggling to cross the river and are forced to pay fees to cross a make shift bridge. They are appealing to the national government to build a strong, permanent bridge that can withstand flooding caused by heavy rains.