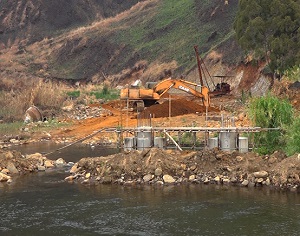 Usino Bundi District in Madang Province will connect with Simbu Province in the next 18 months.

Usino Bundi MP Anthon Yagama says, the district is working on a bridge along the Bundi portion.

Drilling and work is progressing with building materials already in place. Yagama said people are excited to see the completion of the bridge and see the road get sealed for better access to Simbu and other highlands provinces.

The new road is said to be a four hours long drive from Bundi to Simbu.

“It would only take 4 hours to drive to Simbu, that’s like half a tank for Toyota land cruisers”, Said Yagama.

Mr Yagama says, the new road will bring many benefits to the economy, for both provinces.

“People living along the corridor of Usino, Brahman, and Bundi must venture into agricultural activities… The road will provide an avenue for people to sell their produce,” Yagama said.

MP Yagama said the district is concentrating on building roads to make access viable and allow people to be more sustainable.