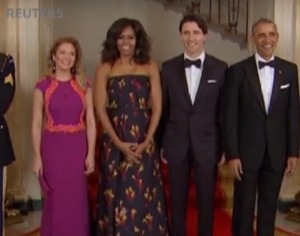 U.S President, Barack Obama, and Canadian Prime Minister, Justin Trudeau, have announced a joint plan to combat climate change. The duo made the announcement during Trudeau’s visit to Washington D.C.

Ending an icy period in U.S.-Canada relations and celebrating shared goals on climate and trade, President Obama offered a red-carpet welcome for Canadian Prime Minister at the White House yesterday.

The two nations started the day by agreeing to joint steps to fight climate change, including cutting methane emissions from oil and gas operations and signing last year’s Paris climate deal “as soon as feasible.”

In his address, President Obama said “I’m especially pleased to say the United States and Canada are fully united in combatting climate change. As the first U.S. president to visit the arctic, I saw how both of our nations are threatened by rising seas, melting permafrost, disappearing glaciers and sea ice and so we are focusing on making sure the Paris agreement is fully implemented and we are working to double our investmen’s in clean energy research and development. Today we are also announcing some new steps, Canada is joining us in our aggressive goal to bring down methane emission in the oil and gas sectors in both of our countries and together we are going to move swiftly to establish comprehensive standards to meet that goal.”

Agreeing, Trudeau echoed Obama’s commen’s on the alliance, saying, “The President and I have announced today that we will take ambitious action to reduce methane emissions nearly by half from the oil and gas sector, reduce use and emissions of hydro fluorocarbon, and implement aligned greenhouse gas emissions standards for heavy duty vehicles amongst other plans to fight climate change.”

Methane, which can leak from pipelines and valves, is a powerful greenhouse gas, with up to 80 times the potential of carbon dioxide to trap the planet’s heat.

The two countries also committed to cutting emissions of methane by 40 to 45 per cent below 2012 levels by 2025, to take steps to fight climate change in the Arctic, and to speed the development of green technologies.

Trudeau’s visit was topped by a state dinner yesterday evening, making him the first Canadian leader to be granted that honour since 1997.

Another economic slump, another communications test for Fed