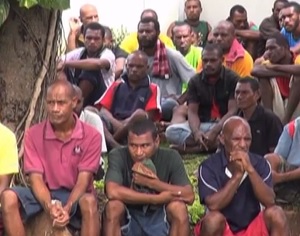 The shortage of inmates’ uniforms is a concern for warders at Bomana Prison.

Apart from other critical issues such as maintenance and accommodation, uniforms have now become an urgent need.

These commen’s were made by Bomana Jail Commander, Kiddy Keko at the Inmates Dedication Service today.

Among other concerns raised by Commander Keko is the urgent need to buy uniforms for inmates – an issue of paramount importance.

Keko said the uniform shortage is a deprivation of prisone’s’ rights and this needs to be addressed by the Correctional Service Department as soon as possible.

Commander Keko’s commen’s come after prisone’s, who broke out of jail, could not be identified quickly because most escapees were in civilian clothing.

But at Bomana, Commander Keko says there have been major breakouts from the prison over the past 17 months. Keko said increased rehabilitation programs conducted in prison cells have changed the behaviour and mind set of many hard core criminals.

Today, many have leading roles in Bomana Prison’s rehabilitation programs. One of these is the Personal Viability program, which is aimed at being independent and building inmates’ self-esteem.

Correctional office’s and inmates in other prisons throughout the country are also facing a shortage in uniform supplies. In Lae, a bulk of inmates, including major crime offenders and juveniles, are serving time without the correct inmate uniform.