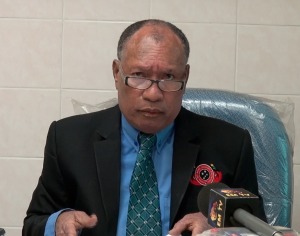 In a separate news conference, the Trade Union Congress President, Ugwalubu Mowana, has said the current impasse between Police Commissioner and the National Fraud Squad was not in the interest of the country and rule of law needed to be upheld.

He said that the office of the Police Commissioner is guided by its own act which the TUC respect but the National fraud’s independence had to be respected as well.

Mr Mowana speaking on behalf of the trade union congress says that they have been monitoring the situation and the rule of law should be upheld.

He says that the court decision passed down by the National court should be respected.

Mowana said the tug of war between Police commissioner, Gary Baki, and National fraud squad was pulling apart Constitutional offices and was not in the interest of the country.

The union have been silent since the suspension of the members of the fraud squad. Today, they responded only after being prompted with questions.

Ugwalubu Mowana said for the good of the people and country the Rule of law must be upheld.

He says the National fraud squad was an important part of the Royal Police Constabulary and should be able to do their job without favour.