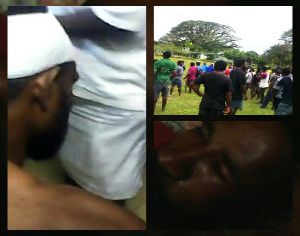 Two students have been injured following a spate of the violence at the University of Natural Resources and Environment that continued once again, this afternoon.

Student leaders say opportunists are taking advantage of the prolonged boycott and are stirring up violence.

The prolonged boycott at the University of Natural Resources and Environment has resulted in two students injured and hospitalised.

One student received stab wounds to his head, while the other was severely beaten.

It’s understood that an altercation between students and locals last night has resulted in a revenge attack on the two students at the Kerevat township this afternoon.

East New Britain police yesterday sounded a warning to students not to stage any violent boycotts within the campus.

The boycott has now dragged into its sixth day as students await an answer from the administration, over an increase in tuition fees by 60 per cent.

On Monday, students protested and demanded the removal of the university’s bursar and called for immediate intervention from the Office of Higher Education.

The Minister for Higher Education yesterday said the matter is an internal issue, and should be handled by the university’s administration.

A delegate from the Office of Higher Education is expected to attend to the boycott tomorrow, to talk to both the students and the administration.