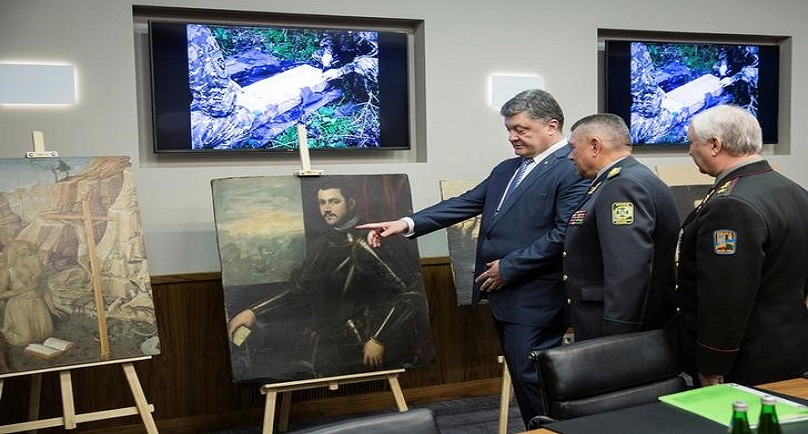 Ukrainian authorities will now invite Italian experts to authenticate the paintings — which have an estimated value of more than 16 million euros ($18.3 million) — and prepare for them to be handed back, his office said in a statement.

Footage released by the president’s office showed Ukrainian border guards unwrapping the paintings, which had been covered with plastic sheets.

The artworks were found about 1.5 km (1 mile) from the border with Moldova, the statement said, without elaborating.

The paintings were stolen on Nov. 19 by thieves who acted just after the Verona museum’s 11 staff had left but before a remote alarm system with the police station was activated. They tied up the museum cashier and forced an armed guard to hand over keys to his car, which they used to get away.

The robbery prompted recriminations in Italy over the lack of security at the museum, which some critics blamed on public spending cuts.

Poroshenko, whose government needs to convince its Western backers that it is serious about tackling corruption, said recovering the paintings was a measure of what Ukraine was capable of.

“Today, this brilliant operation reminds the world about the efficient struggle of Ukraine against smuggling and corruption, inter alia, smuggling of works of art,” Poroshenko said.

Last month Ukrainian security services recovered four Dutch masterpieces, dating from the country’s 17th-century Golden Age, more than 10 years after they were snatched from a museum in the Netherlands.

As oil plows through $45 a barrel, U.S. producers rush to lock in prices

At her first summit, UK’s May tries to reassure EU on Brexit