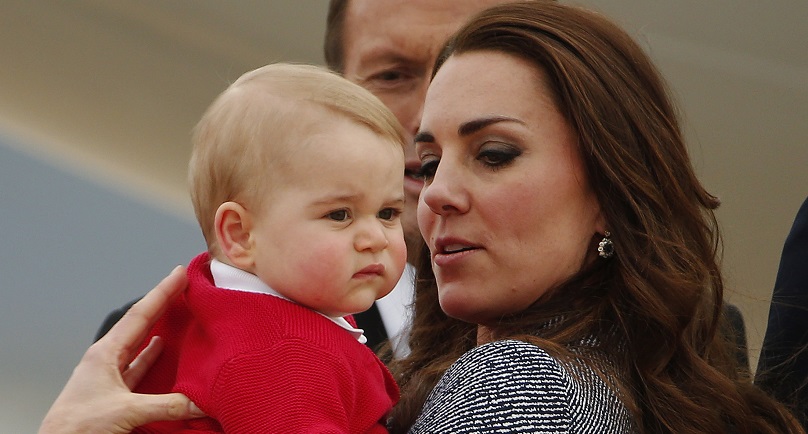 Image: Britain’s Catherine, the Duchess of Cambridge, holds her son Prince George as they prepare to board a plane with her husband Prince William (not pictured) to depart Canberra April 25, 2014. REUTERS/Phil Noble/Files

Photographers have followed George and his nanny around London parks, have pursued cars leaving royal homes, and police found one hidden in a blacked-out car outside a children’s play area visited by the prince, a statement said.

“In recent months, there have been an increasing number of incidents of paparazzi harassment of Prince George and the tactics being used are increasingly dangerous,” added the statement from the Kensington Palace residence of George’s parents Prince William and Kate Middleton.

William, second in line to the throne, and his wife have tangled with the media before over the paparazzi’s tactics and have said that they want their children to be able to play in public without being photographed.

“The vast majority of publications around the world – and all British publications – have refused to fuel the market for such photos,” the statement said.

But it added: “Despite this, paparazzi photographers are going to increasingly extreme lengths to observe and monitor Prince George’s movements and covertly capture images of him to sell to the handful of international media still willing to pay for them.

“A line has been crossed and any further escalation in tactics would represent a very real security risk.”

The issue of harassment by the paparazzi is particularly sensitive for William whose mother Princess Diana was killed with her lover Dodi al-Fayed in Paris in 1997 when her limousine crashed into the wall of a tunnel as they tried to flee a posse of chasing photographers.

He has been determined to protect his family from the press.

George, third in line to the throne, was born to a global media frenzy in July 2013 but has spent most of his life since then out of the spotlight, with only a handful of public appearances.

The royals also complained about harassment of Kate Middleton before the couple married in 2011. A year after their wedding, European magazines printed topless pictures of her taken while she was on holiday in France.