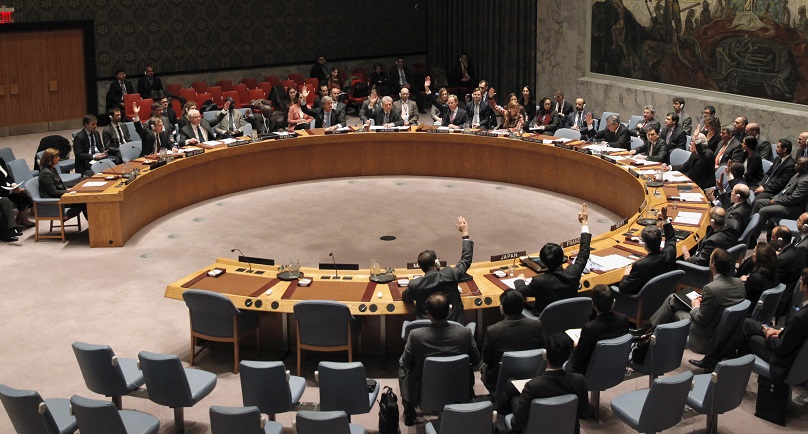 Image: The United Nations Security Council votes to approve a resolution calling for the establishment of a U.N. mission to oversee disarmament should Colombia’s government and leftist FARC rebels reach a peace deal at U.N. headquarters in New York, January 25, 2016. REUTERS/Mike Segar

The 15-member council unanimously adopted a British-drafted resolution that would establish a political mission for 12 months “to monitor and verify the definitive bilateral ceasefire and cessation of hostilities, and the laying down of arms.”

“This concrete mandate of the Security Council will benefit all Colombians and will contribute to build confidence in a country determined to overcome the aftermath of a decades-long conflict that caused too much suffering for generations,” Colombia’s Foreign Minister Maria Angela Holguin said after the vote.

Colombia’s government and FARC jointly asked the Security Council to help monitor and verify rebel disarmament should the two sides reach a deal to end their 50-year-old war, which has killed 220,000 people and displaced millions, by a March 23 deadline.

“It is a commendable step forward from the government of Colombia and the FARC to voluntarily bring this issue to the United Nations. That’s a rare occurrence,” Britain’s U.N. Ambassador Matthew Rycroft told reporters ahead of the meeting.

The rebels’ willingness to make the request jointly with the government is a sign of progress as the two sides aim to reach a comprehensive peace agreement. Colombian President Juan Manuel Santos said last year he would make such an appeal to the United Nations. He staked his 2014 re-election on the peace talks.

“Colombia is now on the precipice of a historic achievement,” the U.S. ambassador to the United Nations, Samantha Power, told the council. “The Security Council shows that the United Nations stands with the Colombian people as they forge this new future.”

The resolution asked U.N. Secretary-General Ban Ki-moon to present detailed recommendations for such a mission to the Security Council for consideration and approval within 30 days of the signing of a peace deal.

China’s CO2 emissions may have peaked in 2014: study