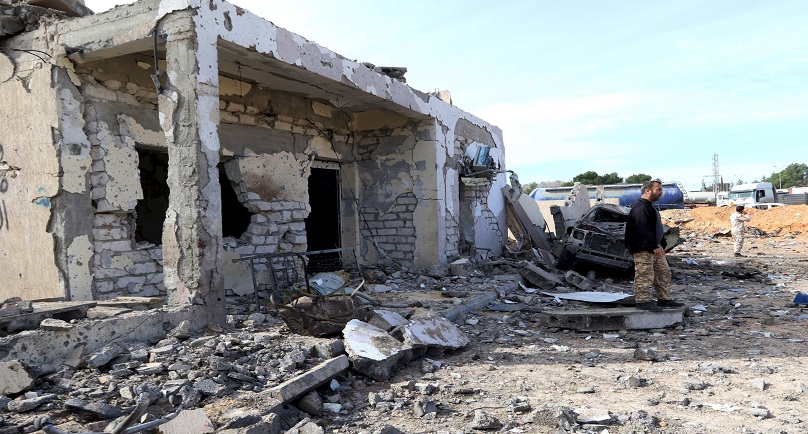 Image:General view of damage at the scene of an explosion at the Mislattah checkpoint near Khoms, on the coast road between Tripoli and Misrata Libya November 24, 2015. REUTERS/Stringer

Libya’s U.N. ambassador, Ibrahim Dabbashi, said Libyan authorities have no plans to request Western air strikes against Islamic State militants anytime soon, if at all. He dismissed media reports citing him as saying the resolution would lead to a swift Libyan appeal for Western military intervention.

The unanimously adopted resolution, drafted by Britain, made clear that Libya’s future unity government should be the sole representative for the North African country, where competing governments have long vied for power.

Four years after Muammar Gaddafi’s fall, Libya is deeply fractured, with a self-declared government in Tripoli and an internationally recognised one in the east, each backed by coalitions of former rebels and militias. Hardliners in both Libyan factions reject the peace deal.

The resolution said the council welcomed the formation of the so-called Presidency Council in Libya and urged it to a form a unity government within 30 days as called for in last week’s agreement.

It also urged the Presidency Council to finalise interim security arrangements necessary for bringing stability to Libya and called on U.N. member states to “respond urgently to requests for assistance” from Libya’s unity government.
This did not mean Libya wanted U.S., British, French or other countries conducting bombing sorties against Islamic State militants in Libya.

“No one is thinking about requesting foreign intervention at the moment,” Dabbashi told Reuters before the vote.
“We are willing to fight ISIS ourselves,” Dabbashi added, using an acronym for Islamic State.

Dabbashi said Libya may eventually want air support from Western countries in the fight against Islamic State but suggested that such a request, if it comes, was not imminent. The priority was strengthening Libyan security capabilities with Western training and lifting the U.N. arms embargo, he said.

Foreign countries would need a Libyan request or U.N. mandate in order to intervene militarily in Libya.
British U.N. Ambassador Matthew Rycroft welcomed the adoption of the resolution and urged all those in Libya who have not embraced the Libyan peace deal to do so.

“The door is open and the hand of friendship extended,” Rycroft said.

U.N. diplomats and officials said privately they are worried the precarious agreement in Libya could fall apart in the coming days or weeks.

The chiefs of the two rival parliaments have rejected the U.N. deal.

(Reporting by Louis Charbonneau; Editing by Will Dunham)