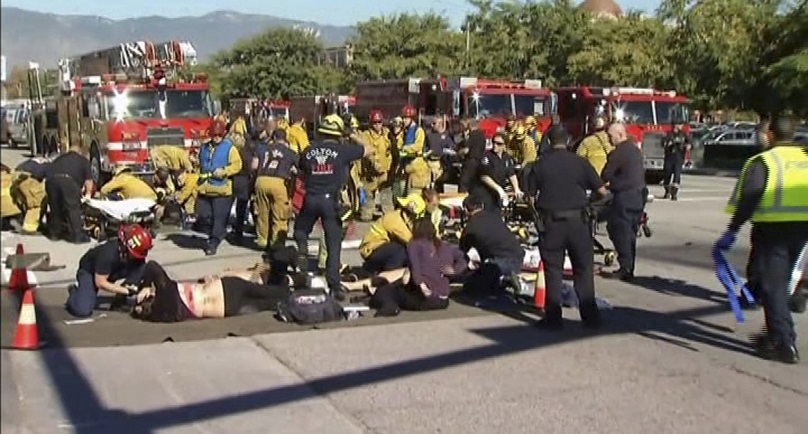 Image: Rescue crews tend to the injured in the intersection outside the Inland Regional Center in San Bernardino, California in this still image taken from video December 2, 2015. REUTERS/NBCLA.com/Handout via Reuters

By Tim Reid and Dan Whitcomb

SAN BERNARDINO, Calif. (Reuters) – A man and a woman suspected of taking part in a shooting attack that killed 14 people and wounded 17 at a Southern California social services agency on Wednesday died in a shootout with police hours later, authorities said.

One police officer was injured in the gunfight with the two suspects, who were confronted in their getaway vehicle after fleeing the scene of the shooting in San Bernardino, about 60 miles (100 km) east of Los Angeles, according to police.

The shooting rampage marked the deadliest U.S. gun violence since the massacre at Sandy Hook Elementary School in

Newtown, Connecticut, in December 2012, in which 27 people, including the gunman, were killed.

Authorities also detained an individual seen running away from the vehicle, but investigators were not immediately sure that person was involved in the case, Police Chief Jarrod Burguan said at a news conference.

The chief said it was possible that a third shooter remained at large and that there were other people “involved in the planning” of the crime.

Burguan said the two suspects who were killed were armed with assault rifles and handguns and were dressed in “assault-style” clothing.

NBC News reported one of the three suspects was identified as Syed Farook by multiple sources, but Reuters was not able to confirm that.

A person by that name was listed on county documents as an employee of the San Bernardino County Environmental Health Department. That department had gathered on Wednesday for a holiday party at the shooting site.

The attack unfolded at 11 a.m. on the campus of the Inland Regional Center, an agency that serves the developmentally disabled, in a building housing a conference center that was being used by the county department.

The Los Angeles Times, citing information from a senior federal official who was monitoring the case, reported that investigators believe one of the shooters left the party after getting into an argument and returned with one or two armed companions.

Burguan said he was aware someone left the party following a dispute but did not know whether that individual returned.

The chief said he knew of no possible motive for the shooting spree.

Burguan said the manhunt initially led police to a home in the neighboring town of Redlands, and that police pursued a suspected getaway vehicle that was seen leaving that address back to San Bernardino, where the shootout ensued.

Regional Center, including one that was “believed to be a potentially explosive device.”

David Bowdich, an assistant regional FBI director, said federal agents and local law enforcement were being cautious about entering the house in Redlands because of concerns about explosives that might have been left there.