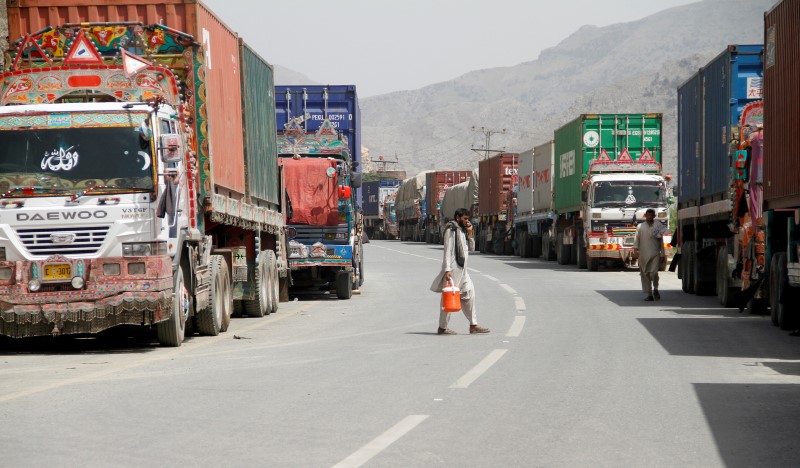 By Mehreen Zahra-Malik and Jibran Ahmed

TORKHAM BORDER CROSSING, Pakistan (Reuters) – Hundreds of trucks lined roads leading to the normally bustling Torkham border crossing between Pakistan and Afghanistan on Thursday, with drivers increasingly frustrated at an impasse between the two countries over their disputed frontier.

Pakistan is going ahead with plans to build a barrier at the crossing, saying that it is necessary to keep out Islamist militants sneaking in from Afghanistan.

But Afghanistan rejects the Durand Line border drawn up in 1893, and the row over a solid recognition of that boundary led to armed clashes between the neighbouring countries on Sunday that killed four people.

“We just want this to end so we can go home and get back to making an honest living.”

Hundreds of brightly painted trucks lined both sides of the road at the end of the Khyber Pass, unable to deliver their cargo. The smell of rotting fruit filled the air, and drivers sheltered from the sun under their vehicles during the Muslim fasting month of Ramadan.

Thousands of vehicles normally pass through the crossing every week, making it a vital trade link between the countries.

A ceasefire agreed by Afghanistan and Pakistan is holding, but the weekend skirmishes reflected strained relations between them in recent months.

Afghanistan, struggling to contain a stubborn insurgency led by Taliban militants, blames Pakistan for harbouring fighters and allied networks on its territory.

Pakistan denies it supports militants, and says it is building the gate at Torkham to stop the movement of militants coming the other way, from Afghanistan.

“In the past there would be small skirmishes, but nothing like this,” said one guard at the crossing, Shafi Ullah, referring to the weekend clashes.

“But we will build this gate at all costs. … There is terrorism, there are blasts – it all comes from that side (Afghanistan).”

“There has been no aggression or provocation by Pakistan,” Aziz said.

“The past three times, Pakistani forces attacked us and our forces were in a defensive position and defended themselves and our soil,” said Attaullah Khogyani, spokesman for Afghanistan’s Nangarhar province where Torkham is located.

Afghanistan’s ambassador in Islamabad, Omar Zakhilwal, on Thursday accused Pakistan of reneging on ceasefire terms that he said included halting construction of the gate.

Zarwaid Khan, a Pakistani border guard, said construction of the gate was continuing and there was no fighting on Thursday, although he said the situation was still “delicate”.

“We are watching and waiting,” he said.

France’s Macron to back push for global environment rights pact