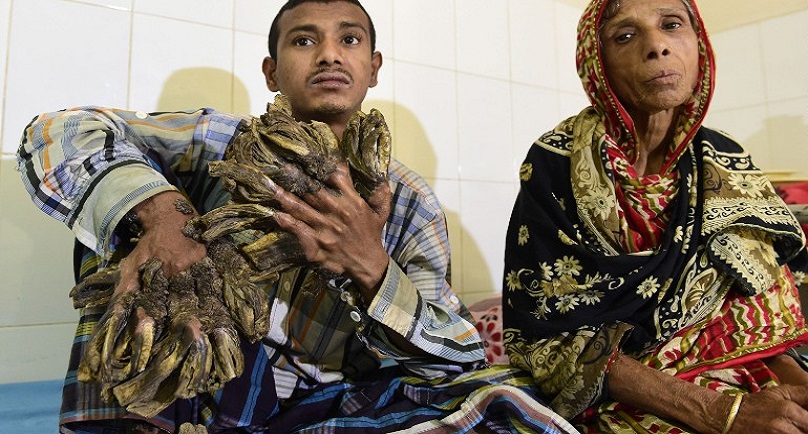 Abdul Bajandar, a Bangladeshi father, dubbed “Tree Man” has a rare disease called epidermodysplasia verruciformis or tree man disease, which causes wart-like skin growths. The growth, which has grown on his hands and feet resembling aging, twisted tree branches, will finally undergo surgery to remove the growth which he has been suffering from for 20 years.

Now 30, Bajandra first noticed the growth on his hands when he was 10 years old and tried cutting them off by himself.

A Rickshaw driver in a small town called Khulna, he slowly lost his ability to do work and finally stopped working as his condition worsened overtime. He can no longer hold a spoon to feed himself.

After so much attention, Bajandra’s plight became known that surgeons from Dhaka offered to perform the surgery for free.

Tests are underway to ensure the suregery will be performed without having to damage major nerves or cause any other health problems.

Samanta Lal Sen, a director from the Dhaka Medical College Hospital, says there are only three known cases of such in the world, which Abdul is one of.

“The surgery will be a lengthy process and will involve many operations. The whole process may take up to six months, Lal Sen Said.

The Doctors, as well as Bajandra, are hopeful and confident about the surgery.