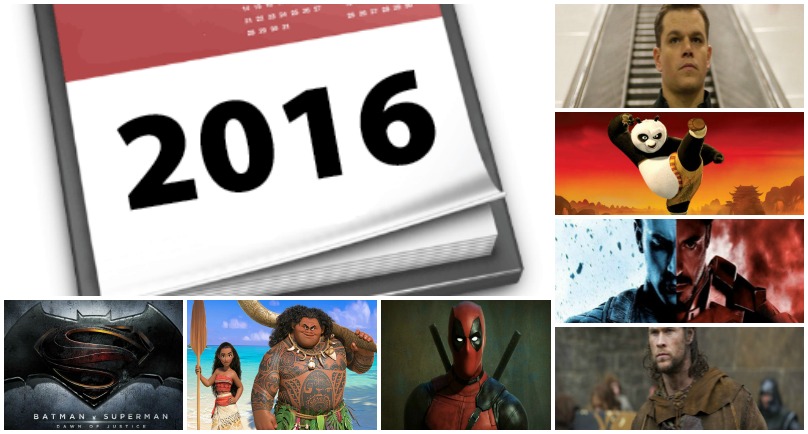 Continuing his “legendary adventures of awesomeness”, Po must face two hugely epic, but different threats: one supernatural and the other a little closer to his home.

Originally set to be released during December 2015, but Dream works moved the sequel Star Wars as it had a better chance of box office gold.

What it’s about you ask? Lethal mercenary Wade Wilson (Ryan Reynolds) undergoes elective – and experimental – surgery after learning that he has been diagnosed with cancer.

In an effort to cure his cancer the experiment leaves him with accelerated healing powers, disfigured skin, an unstable mind with a “dark, twisted” sense of humour.

Armed with new abilities and a new identity, Wilson hunts down the man who nearly destroyed his life.

Yes! Another superheroes movie!  In the follow up to Man of Steel, Henry Cavill returns as Clark Kent/Kal-El after the events of the Kryptonian attack on Metropolis that marked the beginning of his journey as Superman.

Ben Affleck’s “tired, weary and seasoned” Bruce Wayne suits up as Batman to hold Superman accountable, along the way forming the epic partnership that will one day be the foundation of the Justice League.

What it’s about: After helping Snow White to defeat the Evil Queen, the Huntsman (Chris Hemsworth) strikes off on his own adventure.

The new sequel reveals how the fates of The Huntsman and Queen Ravenna are deeply and dangerously intertwined.

In the aftermath of a very public attack, the leaders of the world begin to debate how many restrictions should be placed on super-powered beings, with Captain America (Steve Rogers) and Tony Stark (Robert Downey Jr.) landing on opposing sides of the discussion.

The ensuing “war” will pit several Marvel heroes against each other… while also introducing new heroes like Black Panther (Chadwick Boseman) and Spider-Man (Tom Holland).

After he reunites with an old pal through Facebook, a mild-mannered accountant is lured into the world of international espionage.

The story begins with a class reunion approaching, as a former high school sports star turned accountant (Hart) is contacted by a classmate (Johnson) who was bullied and humiliated back in the day.

The “loser” that the accountant remembers is now a CIA contract killer who ropes him into helping foil a plot to sell classified military secrets.

Do you miss Bourne Identity?! The fifth Bourne movie will be the fourth starring Matt Damon as Jason Bourne. Matt Damon has said it will try and figure out where Bourne fits into the world of espionage in a post-Snowden universe.

Aloha! The latest Disney Cartoon originally described as a “mythic adventure set around 2000 years ago and across a series of islands in the South Pacific.

The film will follow the journey of a spirited teenager named Moana as she sails the Pacific Ocean to complete her “ancestor’s quest”, teaming with a demi God named Maui (Dwayne “The Rock” Johnson) to battle incredible sea creatures and explore brave new worlds.