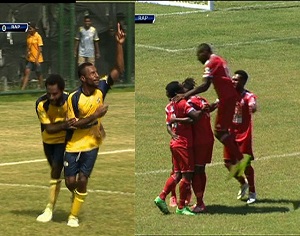 The Sir Ignatius Kilage stadium will play host to perhaps the biggest match of the Telikom National Soccer League on Saturday, when Hekari United take on Lae City Dwellers.

With Hekari being undefeated throughout the season with a 13 game winning streak, and Lae City thrashing Rapatona last week, this match is regarded as possibly the biggest test for both sides.

Hekari had made their intentions known very early in the season that a tenth championship title was the aim for 2016.

After barnstorming to the top of the southern conference table after only six of the 10 rounds, and being undefeated throughout the season, that belief has become one step closer to reality.

With a host of new recruits for Hekari including Rodney Mobiha and Sammy Cambel, and the return of Wira Wama from the US, this is easily one of the strongest Hekari sides in years, and also the most local-centric, with only two players from overseas in the squad.

For Hekari, this will be their biggest test, as Lae City Dwellers have proven themselves worthy contenders for back-to-back titles, a feat only Hekari themselves have been capable of doing. With the thrashing that Lae dished on a hapless Rapatona side, they will be buoyed further by the home crowd in Lae.

Troy Gunemba had missed out on that particular match with a calf strain that may still see him sidelined for this match, however, with Michael Foster and Joachim Waroi both reaching peak form in the midfield for Lae City the team certainly doesn’t lack depth.

The importance of the match cannot be underestimated; both sides are heading into this blockbuster as championship sides, and the winner will have bragging rights as to the best in the country, as well as one foot in the door for a grand final position.