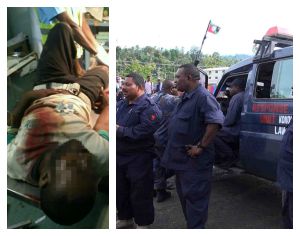 Three suspects who were on the run in Kokopo since last week have been captured by Kimbe Police this week.

The three men reportedly made it to Kimbe on the incomplete New Britain highway.

Two of the suspects escaped from the Kokopo police cell last week.

One of the suspects is alleged to be a member of the gang which went on a robbery spree in Kokopo and Rabaul town last month.

He was shot and wounded by Kimbe police earlier this week.

The third suspect is a police officer who assisted in the escape of the two criminals at the Kokopo police cell. He has since been suspended, arrested and charged.

The three suspects will be transferred back to Kokopo after they are interrogated by Kimbe police.

Russian warships linger near PNG in light of G20 Summit