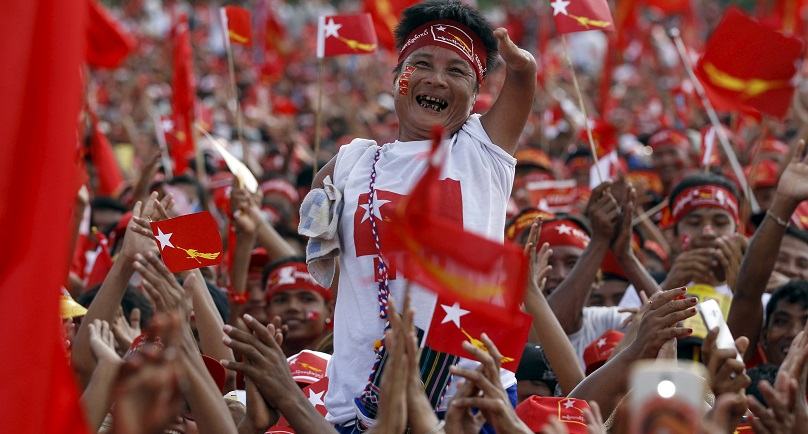 Buses, taxis and trucks decked with flags and banners of Suu Kyi’s National League for Democracy party lined the streets leading to a stadium where the charismatic politician rounded off her energetic campaign that lasted nearly two months.

The rally was one of the biggest meetings of pro-democracy enthusiasts in the country’s recent past, a historic moment for the Nobel Peace laureate who has spent years under house arrest and on Sunday shared the stage with many former political prisoners from her party.

“People who say the change has already happened and it’s not necessary to change more, say that because they don’t really want to change,” said Suu Kyi.

“We have to be very powerful and strong in the parliament. So, don’t try to talk about other solutions, and give us 100 percent of the vote,” she said.

That such a huge gathering could take place peacefully in Myanmar shows the extent to which the country has changed after President Thein Sein’s semi-civilian government took power in 2011 following nearly half a century of strict military rule, ushering in a series of democratic reforms.

The scope and pace of that transition will be determined by the outcome of the election, in which the ruling Union Solidarity and Development Party and the NLD will battle for the hearts and minds of more than 30 million voters.

In her speech, Suu Kyi called on her supporters to stay united and avoid provocations on election day. She expressed the will to work with any political party for public good.

“We will try to win the election in the right way. Don’t stray from the right way because of the rumours and dirty provocations. It is the time to compete against the negative people with our strong spirit,” said Suu Kyi.

Suu Kyi has criss-crossed the country galvanising crowds with a message of sweeping change, faster reforms and a state respectful of ethnic minorities.

In the run-up to the poll, Suu Kyi has pledged to speed up democratic reforms, scrutinise investment to limit environmental impact and amend a junta-drafted constitution that bars her from becoming president.

“As a dignified political organisation, we don’t hate anyone and have to treat all of the people equally. If the NLD won in the election 100 percent, we will welcome all the other parties, we want to work together with them,” said Suu Kyi.