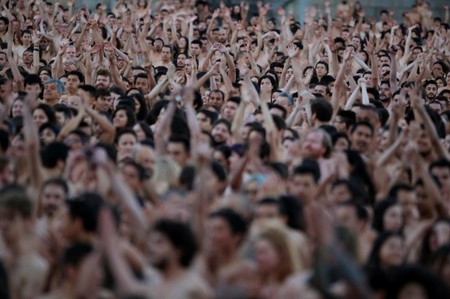 BOGOTA (Reuters) – Colombians turned out en masse on Sunday and shed their inhibitions along with their clothes for American photographer Spencer Tunick’s nude photo art project in Bogota’s Bolivar Plaza.

It was the latest event staged by Tunick, who has done nude photo shoots in cities around the globe. In 2007 in Mexico City 18,000 people stripped off in the heart of the city’s Zocalo Square. Volunteers have also posed naked in freezing temperatures on a Swiss glacier.

“The body for me represents purity and unity and a positive notion of life,” Tunick explained. “So bringing the body into a space of government and tradition just brightens the whole place up for me.”

Ivonne Morales said she wanted to take part in the event because Tunick’s projects are works of art.

“This performance really attracted me because it is a crazy thing that someone does once in their lifetime. It is something different, beautiful,” she said.

The models posed au naturel in the square in Bogota’s historic area where the city’s cathedral and other monuments are located.

The photographs will be displayed in Bogota’s Museum of Modern Art later this year. All of the participants will also receive a limited edition print taken by Tunick.

Drake on course to smash streaming records with ‘Scorpion’