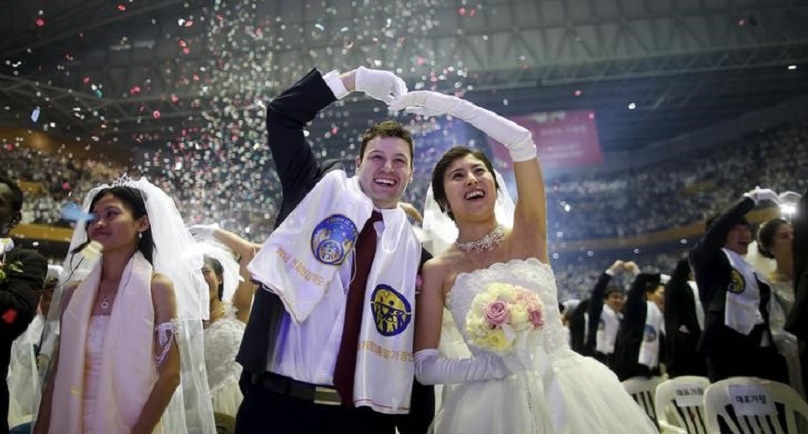 By Sang-gyu Lim and Jisu Kim

GAPYEONG, South Korea (Reuters) – About 3,000 couples from 62 countries tied the knot in South Korea on Saturday, in a mass wedding ceremony conducted by the Unification Church founded by the late Reverend Sun Myung Moon.

A further 12,000 couples worldwide participated in the ceremony via the Internet, said Ryu Kyeung-seuk, president of the South Korean headquarters of the church.

His widow, Hak Ja Han Moon, officiated at Saturday’s ceremony, which was witnessed by about 22,000 church followers and guests gathered at the church’s CheongShim Peace World Center in Gapyeong, about 75 km (50 miles) northeast of Seoul.

The couples included 1,000 who were newly wed and about 2,000 who were already married and seeking to re-dedicate their marriages and families to God as they had married before joining the church.

“We’ve been engaged for over one year now, mostly been separated, so of course it’s extremely good to be together again,” said Hyo-joo Song, from Britain, who married his Japanese wife on Saturday.

“And yes, we’re happy to be married and also share that experience with many other people.”

Moon was a lightning rod for controversy and was once jailed in the United States for tax evasion. He also declared in 1992 that he and his wife were messiahs.

Critics over the years have called the organisation a cult, questioning its finances and how it indoctrinates followers, who are sometimes derogatorily known as “Moonies.”

Indian girl who wandered into Pakistan arrives home after 13 years