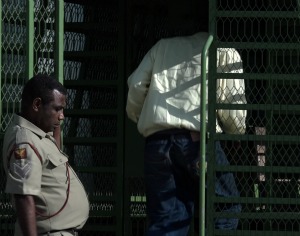 Probationary Constable Pedro Baiba was granted bailt at K1,000 by the Waigani National Court following a bail application filed by his lawyer, on January 11 this year.

Acting Judge Salee Koeget ruled in favour of Baiba this morning, after listening to submissions by Baiba’s lawyer and the objections made by the lawyer representing the state yesterday.

The bail application was made on the grounds that the arrogating circumstances surrounding the alleged armed robbery did not connect Baiba to the offence.

Baiba’s lawyer said there was no evidence that a fire arm or any offensive weapon was used in the alleged offence.

However, the lawyer representing the state objected to the bail arguing that Baiba was previously charged for sexually touching and malicious damage to state property and violent behaviours was stated in the summary of facts for those alleged offences.

On January 8 this year, the Bomana District Court heard that Baiba and his colleagues from the NCD Foot Beat Patrol Unit confiscated cigarettes from a vendor at Waigani on October 27, 2015.

The victim was then eight months pregnant and it was alleged that Baiba searched the vendor’s bag and took K3,700 in cash from her wallet.

A bail application was submitted on the same day but was rejected by senior magistrate, Cosmos Bidar on the grounds that police investigations on whether a firearm was used in the alleged offence were still continuing and decisions would be made based on police investigations.

After listening to submissions made by both Baiba’s lawyer and lawyer representing the state yesterday, Justice Koget described the submissions as serious and adjourned the case to this morning.

This is the third time Baiba was granted bail, twice from the committal courts and now the National Court.