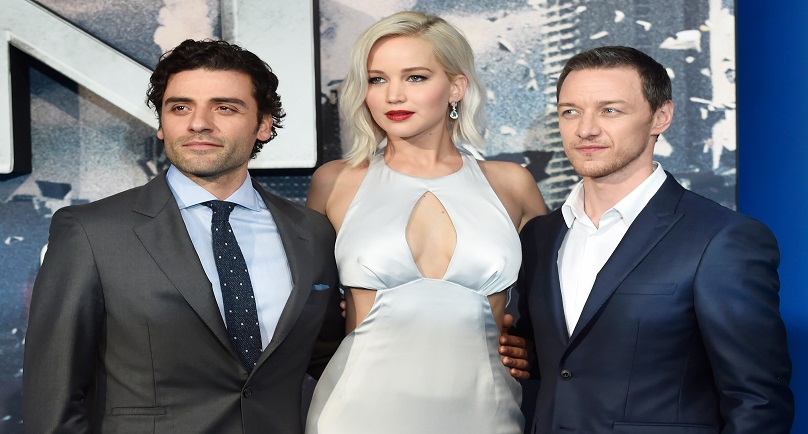 Image: Actor Jennifer Lawrence poses with James MacAvoy (L) and Oscar Isaac at a screening of X-Men Apocalypse at a cinema in London, Britain, May 9, 2016. REUTERS/Hannah McKay

In the movie, the world’s first mutant Apocalypse (Oscar Isaac) awakes in 1980s Cairo after hibernation in ancient Egypt and embarks on a mission for global power with his new recruits, including Magneto (Michael Fassbender).

Professor Xavier seeks to defeat him with the help of Mystique and other mutant students from his school – characters introduced in the original “X-Men” movies and brought to life here by a younger generation of actors.

“…none of these superheroes in these movies are that capable of winning the day on their own,” McAvoy told Reuters in a joint interview with Lawrence.

The movie is the latest superhero action flick hitting screens as Hollywood continues to expand its comic book cinematic universe.

This month, Disney-Marvel’s “Captain America: Civil War” brought together Marvel characters such as Iron Man, Ant-Man, Black Widow and Scarlet Witch as well as a new Spider-Man on screen.

Asked if they could see their mutant characters joining forces with other superheroes in a franchise crossover, Lawrence said “no”.

“Maybe when people get really tired of superhero movies, they’ll do it as one last ditch desperate attempt to kind of milk the cow dry,” McAvoy said.

“I think there are so many characters in the X-Men universe that we could go and explore before we have to go and mash up with those guys,” he said.