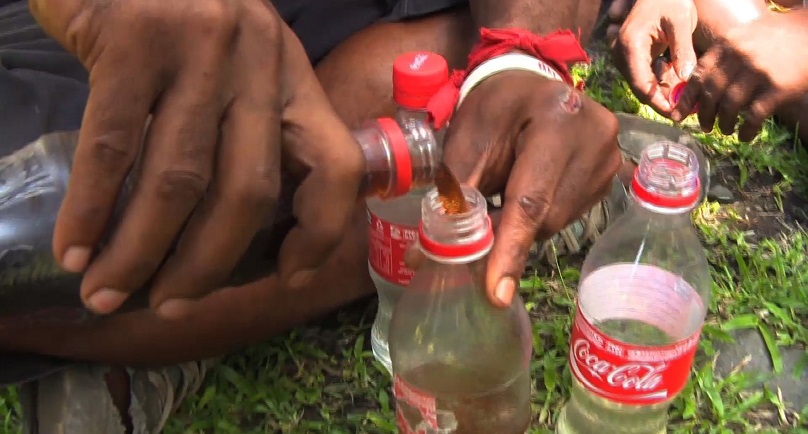 Among the first lot of reports done when EM TV’s Lae Bureau was established in July 2012 was  a series of on the  widespread  production and use of illegal alcohol or “steam” in Lae’s settlement communities.

It started when I was introduced to a self-styled community leader, from Nawae Block –  Lae City’s steam production  hub. For the purpose of this feature, I will call him “John.”

I approached the story (and the interview) with some doubt about “John’s” credibility as a source.

But after the first few minutes of the interview, I realised that much of what he was expressing was another side to the popular view held by rest of society about settlement communities. It is view that settlement communities are home to unemployed, lazy and unproductive youth who are responsible for Lae’s high crime rate.

“You see,” he said, “what you need to understand is that many of the kids that are involved in the production and consumption of steam are kids with big problems.

“Many don’t have parents.  They’ve either lost both parents through divorce or death and they live with relatives who have rejected them.”

John says, the government, despite some of its well-intentioned programs, still doesn’t understand the needs of the youngsters who have become the primary cause of Lae City’s high crime rate.

John’s views are expressed simply in an interview that lasts almost two hours. For many of the petty criminals and bag snatchers, basic love, care and guidance that many outside of their circle take for granted is absent.

It is, also, a difficult challenge for those parents in Nawaeb block who try to keep their children on the straight and narrow.

“I worry about my only son,” says Maria John. “My husband died five years ago and I raise pigs and chickens to pay for his school fees.

“At night I go out and look for him when he doesn’t come home. I’m thinking ‘maybe he is hurt or drunk on steam. I’m always afraid for him.’”

Another woman, a mother of five, tells me raising daughters has its own set of challenges. Among the many questions asked are:  How can you teach them how to resolve disputes without violence when your neighbour is beating his wife every day?

“We put them to school but when they become teenagers, they fall pregnant to men who have a lot of money or to their boyfriends who have nothing to look forward to. Their schooling is disrupted.”

It is an endless cycle that is compounded by urban growth and the disconnection to traditional family structures and values.

“When you tell them to “go back to their villages,” they can’t,” says John.   “Lae City is home. Nawae Block is home. This is the only home they have. They have no connection to their ancestral land anymore.”

That is just the tip of their concerns. For parents who manage relatively well, there is an ever present threat of sexual assaults from those drunk on the widely produced illegal homebrew.

On a Wednesday, John takes me into the settlement.  His house stands in a secluded corner in the settlement. The homebrew producers refuse to talk on camera. He explains that two days ago, a young police constable was attacked during a patrol. While there is a level of respect for Lae police, incidences like this happen sometimes.

So how widespread is the production of steam and who produces it? It’s a question that plagued me. John asks for a show of hands from the small crowd of young men and mothers who were drawn largely by curiosity. Nearly half the number of those present raised their hands.  Those who didn’t said they knew of someone who either sold steam or marijuana.