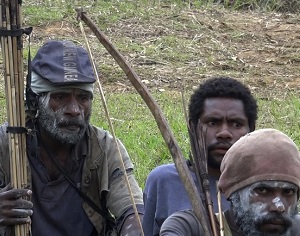 Tensions are starting to ease between people from seven villages in remote Pindiu, in the Morobe Province, who have been involved in an eight month long tribal war over land.

The Morobe Provincial Government and the Finchhafen District administration managed to negotiate a temporary end to the fighting to allow the return of government workers.

It took at least two attempts before a team was able to reach Pindiu station and the outlying villages involved in the tribal conflict.

Classrooms remain empty and have been that way for eight months.

The dormitories at the Pindiu High School were abandoned in haste by students fearing revenge from local tribesmen after the killing of a reserve policeman.

The Headmaster of Pindiu Technical High School, Peter Hatagen, requested for the suspension of classes when the trouble began.

Pindiu High is not the only school that has been suspended.

In Kwela village alone, 56 houses have been burnt to the ground.

A local peace officer was killed when the ambush happened, after which people fled to the jungle and have remained there despite efforts to convince them to return.

Some of the casualties are young with a 12 year old boy killed in a separate attack.

His brother is in Braun Hospital in Finchafen recovering from a vicious attack.

The Morobe Provincial Government has been very cautious about using police to end the fighting.

So far it has cost them over half a million kina for relief for the women and children, and to fly in teams of negotiators.

While it has been a very successful operation so far, the negotiators know it’s not then end.

They still have problems of illegal guns and the possible flare ups that may happen if they lose focus.