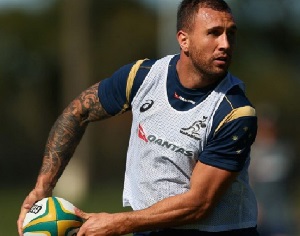 Coming off a strong defensive and top-class kicking game in Sydney last week, the Wallabies are out to prove their 8 point win over the All Blacks wasn’t a fluke.

The Wallabies continued training in Sydney throughout the week and travelled to New Zealand today for Game Two of the Bledisloe Cup this weekend.

The Aussie scrum proved to be a major talking point of their performance, and pivotal in their win over the All Blacks. Impressed with the forwards drive, Prop Scott Sio admitted there were areas of improvement though for Game Two of the Bledisloe.

Wallaby great George Gregan, also popping into training, had a run with the team and handed out a few pointers to the backline ahead of Saturday’s match across the Tasman.

Coach Michael Cheika has made a number of changes to his starting side, primarily with Quade Cooper coming back to form a halves combination with Nic White.

All Blacks coach Steve Hansen has amade three changes to his side for the Eden Park decider, with Ma’a Nonu to replace Sonny Bill Williams, and Victor Vito also to make an appearance in the starting 15.

All Blacks captain Richie McCaw will become the most capped player in test rugby history this weekend, playing in his 142nd match on Saturday.

New Zealand team to play Australia in the Bledisloe Cup: