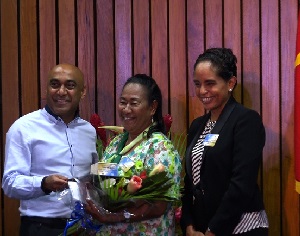 Kori Maraga, is the 2015 Education Role Model winner for the CPL Pride of Papua New Guinea Awards for Women.

Mrs Maraga, a teacher herself, was recognised for her teaching services in various primary schools in the country.

She has taught for over 42 years.

Mrs Maraga started her teaching career in 1973. She has taught some of PNG’s leaders like Bank of Papua New Guinea Governor, Loi Bakani and Vanimo Green MP, Beldan Namah.

In 1995, after 12 years into teaching, Maraga furthered her studies at the University of Papua New Guinea and graduated with an Education Degree in 1997.

In the years, Maraga served in the Education Department taking up various consultative or facilitator roles in different organisation.

Her recognition through the Pride of PNG Awards for Women came as a surprise to the Maraga Family.

The Education Role Model Award is one of the six Awards in the CPL Pride of PNG Awards for Women.  This category recognises one woman each year for their services in educating children in their communities.

Ministers Reshuffled and Sworn In

EQUITV Rolls Out In Western Province