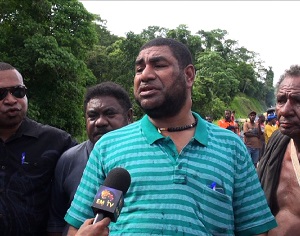 Tolukuma is located in the mountains of Goilala district, inland of Kairuku and Mekeo constituencies in Central province, on the Owen Stanley Range. It is at an elevation of 1,550 metres north of Port Moresby. The gold mine is 100% owned by Petromin PNG Holdings, a state owned company.

The people of Mekeo, who use the Angabanga river, are experiencing sediments build up and over flowing river.

The MP said that the mine tailings are being discharged into the Angabanga River upstream, and flows down to his electorate, where the river flows through a number of Mekeo Villages.

Mr Isoaimo says two separate studies carried out in the past decade prove that the blood streams of local people are contaminated.

His district administration has no option but to seek legal compensation if all councillors and village chiefs agree and pass a resolution.

Police Recruitment for 2017 to Resume in June

Graduates and Students Make a Medical Trip to Lower Jimi