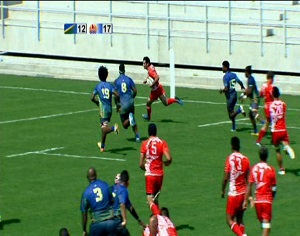 The wind played a minor role in the game, were both Tahiti and Solomon Islands were unsuccessful in securing penalties in the first 15 minutes of the game.

Tahiti were first to put points on the board, sending Centre, Mathiue Taullele over the line. An unsuccessful conversion saw the Tahitians in the lead 5-points to nil.

Solomon Islands then equalised minutes later. But the Tahitians weren’t going to let the game go after suffering a marginal defeat in round one to PNG and sent flanker, Manuari Richmond for another try. Tahiti took the lead 10-points to 5 into half time.

The second half saw a flare of hunger by both teams. Both teams lifting their defence and attack.

Anthony Tesquet finding his feet in the game with a successful conversion.