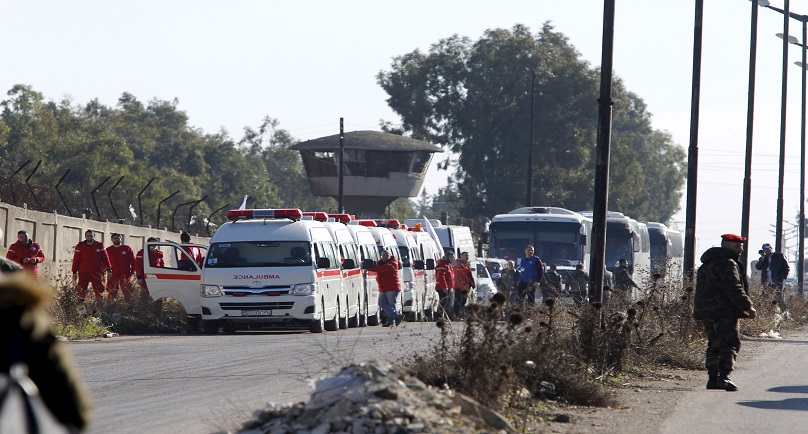 Image: Syrian Red Crescent units wait in the district of Waer during a truce between the government and rebel fighters, in Homs December 9, 2015. REUTERS/Omar Sanadiki

RIYADH (Reuters) – Syria’s fragmented opposition and rebel groups sought common ground on Wednesday ahead of planned negotiations to end a conflict which has devastated the country and drawn forces from Cold War and Middle East rivals into ever deeper combat operations.

The talks in Saudi Arabia mark the most ambitious attempt yet to unify President Bashar al-Assad’s enemies around a joint political platform – seen as a crucial first step to finding a peaceful end to four years of war and battling Islamic State.

The powerful Kurdish YPG is among several groups excluded from the talks and those there are deeply divided over central issues like how to manage a transition from Assad and the role Islam should play in Syria.

But two delegates found solace in what they described as a lack of any major rupture so far among those present.

“It went well. Very positive. We discussed many things. Tomorrow we will discuss a document of general principles,” said one opposition member. The groups hoped to complete the talks on Thursday, but they may continue into Friday, he said.

A member of the Western-backed Syrian National Coalition said there had been broad agreement: “We discussed the main problems relating to the dialogue, the transition and all modalities related to the political process. Most of them agreed.”

In Washington, U.S. State Department spokesman John Kirby told reporters initial reports were “that it’s off to a positive start and that they are beginning to make … some progress.”

More than 100 delegates were invited to the Riyadh meeting, including from the Islamist insurgent group, Ahrar al-Sham, founded by militants with al Qaeda links, as well as opposition figures who have been based in government-controlled Damascus.

While most agree on a call for Assad to go, despite signs that some Western backers have softened their demands after recognising that military force has failed to topple the president, rifts in opposition ranks are still clear.

Before the talks opened on Wednesday, Ahrar al-Sham complained that some delegates were “closer to … the regime” than to the opposition. One activist in exile declined to attend alongside those who “support an Islamic emirate” in Syria.

International efforts to resolve the conflict which has killed 250,000 people and displaced 12 million have been lent added urgency by a wave of deadly attacks across the world claimed by the Iraq- and Syria-based Islamic State and by an escalating refugee flow which has caused a crisis in Europe.

Major powers agreed in Vienna last month to revive diplomatic efforts to end the war, calling for peace talks to start by Jan. 1.

That prompted Saudi Arabia, which projects itself as a leader of the Middle East’s Sunni Muslims, to summon the mainly Sunni opposition and rebel groups. The move angered rival Shi’ite Iran which said the initiative threatened to harm the Vienna process.

The emir of Qatar, Sheikh Tamim bin Hamad al-Thani, whose country is also a major supporter of the Syrian rebels, said the Riyadh meeting represented a “golden opportunity (for the Syrian opposition) to unify their ranks and coordinate their steps beyond setting up a negotiating team”.

Russia has carried out 10 weeks of air strikes, halting rebel gains, and Iran has also given Assad military support and said ousting Assad would be a “red line” for Tehran.

Western powers have stepped up attacks on Islamic State while Saudi Arabia, which backs the rebels, says an expanded military option remains open.

Last month NATO member Turkey shot down a Russian plane it said flew into its air space, highlighting the danger that Syria’s multi-faceted war could spark yet wider conflict.

Russia’s air campaign has helped the Syrian army, backed by Hezbollah fighters and the Iranian military, to halt a rebel advance over the summer which had threatened Assad’s control over the main population centres in western Syria.

Russian air strikes, while containing rebel advances, have not decisively tipped the war in Assad’s favour.

On Wednesday, scores of people left the last area held by insurgents in the city of Homs, a centre of the uprising against Assad which broke out in March 2011. About 750 people are expected to leave the Waer district under a local truce between the government and rebels.

Further north, Syrian government troops backed by Iranian forces have edged closer to a major rebel-controlled highway near Aleppo. They appeared to be trying to cut the main Aleppo-Damascus highway that fighters use to transport supplies from rebel-held Idlib province to the north.

For Saudi Arabia, which has been fighting since March in neighbouring Yemen, Syria has been a secondary battlefield in its regional struggle for influence with Iran. But the kingdom still views the Syrian civil war as central to that rivalry.

Ahrar al-Sham said the Riyadh meeting, which opened at a luxury hotel amid high security, must stand by demands including “the complete cleansing of the Russian-Iranian occupation of Syrian land, and the sectarian militias which support it”.

“OVERTHROW OF ASSAD”
It called for the “overthrow of the Assad regime with all its pillars and symbols” and putting its members on trial.
Syrian security and military institutions must also be dissolved it said, putting it at odds with world powers which agreed in Vienna last month that state institutions be kept intact in any transition of power.
Other rebel factions at the Saudi talks include the powerful Islamist force, Islam Army, and a dozen

groups which describe themselves as elements of the Free Syrian Army (FSA).

The head of one FSA armed group said the first day of talks was focussed on discussing opposition demands and drafting a concluding statement.

“The principles are the unity of Syrian land, the civilian nature of the state, and the unity of the Syrian people,” he said. Ahrar al-Sham said Syria’s “Islamic identity” should be maintained.

Hadi al-Bahra, a senior member of the opposition National Coalition, said there was a positive atmosphere and “no differences among the delegates” so far. “Everyone senses the importance and sensitivity of this stage”, he tweeted.

Although scores of people were asked to attend, the Kurdish administration that runs swathes of north Syria was not invited.

Rebels in western Syria do not trust the main Kurdish militia, the YPG, because they say it cooperates with Damascus rather than fighting it.

Delegates said there was some Kurdish representation, but a Western diplomat who follows Syria said this week the meeting had not brought together as many Syrian factions as hoped.

“It is not all-encompassing. It is not the consolidated, overall opposition platform,” the diplomat said.

(Additional reporting by Tom Perry and Sylvia Westall in Beirut and by Arshad Mohammed in Washington; Writing by Dominic Evans, Editing by Philippa Fletcher and Sandra Maler)