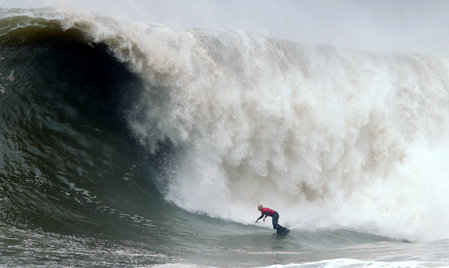 SYDNEY (Reuters) – The heavy storm that battered eastern Australia over the weekend had a major silver lining for a bunch of big wave surfers in the south of Sydney on Monday.

Attracted by the promise of waves of up to 15 feet (4.5 meters), the daredevil surfers came from around Australia for the Red Bull Cafe Fear challenge in Botany Bay, where Captain Cook landed to claim the country for England in 1770.

They got what they wanted with huge waves crashing into the rocks at the break more correctly called Cape Solander, although ultimately conditions deteriorated to a point where the competition was postponed until Tuesday.

Several dozen spectators made their way on foot through the national park to watch the surfers carve their way spectacularly down the walls of gray water.

Wipeouts and smashed boards were far more common than completed waves, however, and Justen ‘Jughead’ Allport, who led the standings after day one, had a neck brace fitted in the water by rescue swimmers after being hammered by a torrent of boiling froth in the opening heat.

Organizers said the contest would resume on Tuesday.