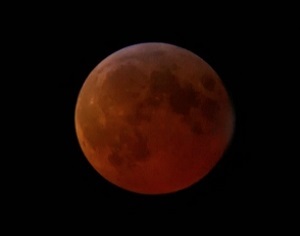 If you’re an avid moonwatcher, then you should keep your eyes locked on the moon tonight.
Tonight is to see the start of a supermoon.

This means the moon will seem larger in the sky, starting tonight, as it reaches it closest point in its orbit of the earth.

And while it might not be visible in Port Moresby, there is also a lunar eclipse predicted for tonight, when the moon will appear red.

It is known as a blood moon.

For the first time in 30 years, there will be a supermoon, in combination with a lunar eclipse.

Late tonight in the U.S. and much of the world, a total lunar eclipse will mask the moon.

Throughout history, lunar eclipses have been viewed with awe, and sometimes fear.

Today, we know that a total lunar eclipse happens when the full moon passes through the darkest part of Earth’s shadow.

Tonight’s supermoon eclipse, will last 1 hour and 11 minutes, and will be visible to North and South America, Europe, Africa, and parts of West Asia and the eastern Pacific.

During a lunar eclipse, the moon appears less and less bright, as sunlight is blocked by the earth’s shadow. As much of the Earth blocks out sunlight, it goes through the earth’s atmosphere, and almost all colours, except red, are filtered out. This makes the eclipsed moon appear reddish or dark brown.

Whilst the full lunar eclipse might not be visible from Port Moresby, PNG will still be able to see the supermoon, appearing larger and closer to earth, hopefully, with a reddish tinge to it.