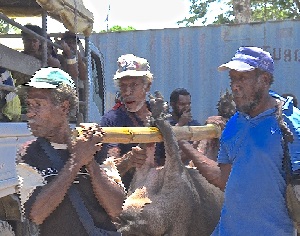 Members of the Sumkar electorate, most of who come from Karkar Island and Rempi villages, gathered at the Jomba police station today to show their support for their local member, Ken Fairweather.

This follows on from the allegations of verbal abuse made against their MP by lawyer, Brian Waffi, were yesterday settled out of court.

Over K1,000 worth of food was presented to representatives of Waffi, as a means of reconciliation from the people of Sumkar.

Both Fairweather and Waffi were not present at this ceremony.

The allegations of verbal abuse were levelled against Fairweather following an altercation which is said to have occurred between the pair following the detah of prominent figure, Nancy Sullivan.