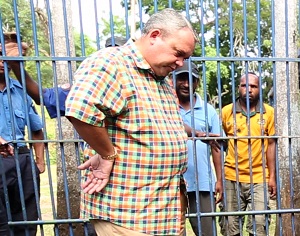 The defacing of the sports sculpture leading to the Taurama Aquatic Centre in Port Moresby stirred up much debate, and disgust, by the general public.

Five offenders, all minors, were handed over to the Badili Police by the community today. Minister for Sport and Member for Moresby-South, Justin Tkatchenko, expressed his disappointment over the offences committed by young citizens, who reside in his electorate.

In his attempts to apprehend the suspects, Tkatchenko personally tracked down a suspect to a well-known secondary school in his electorate. Telling one of the suspects that such behaviour was unacceptable and reminded them the act is criminal in nature.

The minister said that he will have discussions with the commander of Badilli Police Station, to decide a decent punishment for the offenders.

Peer pressure is a major factor that drove one of the offenders to commit such an act, when he was questioned by Tkatchenko. He also met with parents, guardians and the community leader after the offenders were handed over to police.