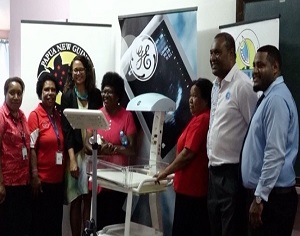 Today saw the donation of an Infant Warmer and Phototherapy unit from PNG Tribal Foundation and General Electric PNG.

She said that each day, 45 – 50 babies are born, and that one or two babies will need Phototherapy, and may require the Infant Warmer.

Each Unit is valued at K33,000, and the whole initiative amounts to more than K100,000 for advanced infant care equipment.

PNG Tribal Foundation Director of Operations, Michelle Hau’ofa, said the next unit will be installed at the Wabag Hospital in the Enga province, with the placement of the third to be finalised shortly.

The initiative looks towards the continued efforts to reduce maternal and infant mortality rates in the country.