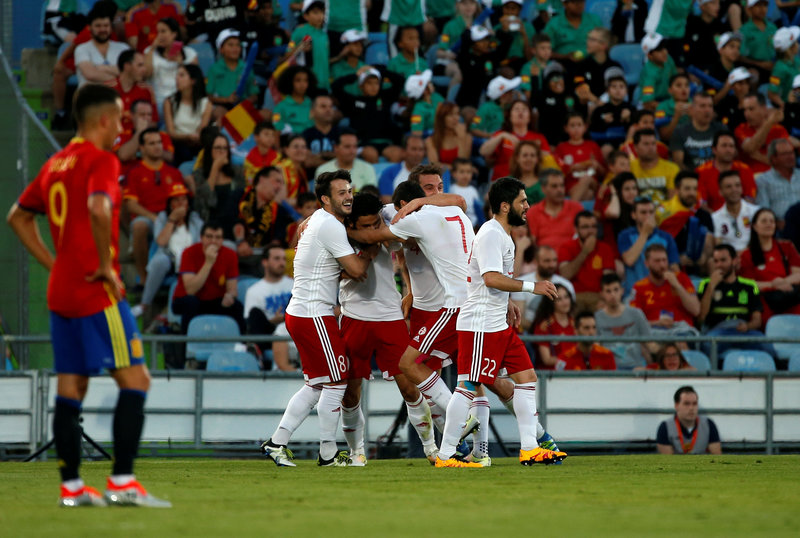 MADRID (Reuters) – Spain’s preparations for Euro 2016 suffered a blow as they were beaten 1-0 by Georgia on Tuesday in their final warmup friendly ahead of the tournament in France.

Tornike Okriashvili tapped in from close range in the 39th minute to secure a surprise victory for Georgia at Getafe’s Coliseum Alfonso Perez stadium.

Spain, who have won the last two European Championships, had not lost since being beaten in a friendly by the Netherlands in March 2015 and came into their final warmup match after convincing wins against Bosnia and South Korea.

The hosts, however, lacked a cutting edge against a well-organised Georgia side who defended deep after taking the lead.

The hosts dominated possession and nearly scored in the 27th minute when Vazquez found Thiago Alcantara in the area, but his right-footed shot rebounded off the far post.

Georgia went ahead against the run of play when a defensive mistake from Jordi Alba allowed the visitors to steal the ball in midfield.

Jambul Jighauri surged into the area before teeing up an unmarked Okriashvili in the six-yard box for an easy tap-in.

A superb cross from substitute David Silva in the 69th minute found Alba in the six-yard box but his first-time shot lacked power and his attempt was saved by substitute goalkeeper Nukri Revishvili.

The home side continued to press forward but lacked the finishing touch against a well-marshalled Georgian rearguard.

Spain travel to France on Wednesday and begin the defence of their title against the Czech Republic on June 13 in Toulouse. They also face Turkey and Croatia in Group D.

Dabinyaba Hopeful of Rising to the Top